From the burps of Chinese, through crazy Latins till “Europe is a country”. Making friends  in China. 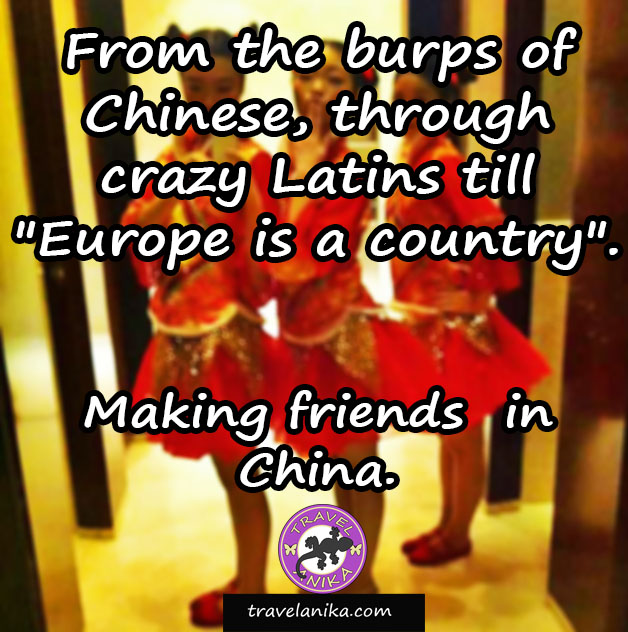 I started dream go to China 2 years before I made it done.  I was very curious about this place as I didn’t know anyone who has ever been there, so I didn’t have much idea what is waiting for me. I was very excited being accepted for the internship in Dongguan thinking YES! I will have Chinese friends, GREAT! I read they are a bit different, WOW I love the diversity of culture! O MY God I was very happy.

Here is how my expectation was wrong….

Subjectively but I’m pretty sure 90% of expats in China will agree with me.

Be aware what I am writing is based on MY experience living in China, and negative things what I mention really happened but IT DOESN’T MEAN each Chinese do this.

Living in China, during one and a half year I met just a few Chinese which speak English great and I could talk with them easily. The others have a pretty difficult accent to understand,  tone many of them is kind of  scary for me like they would planning to put the knife in your stomach. The rest Chinese speak only Chinese. Language is a barrier, but it’s only small piece of why was difficult for me to make friends with locals. 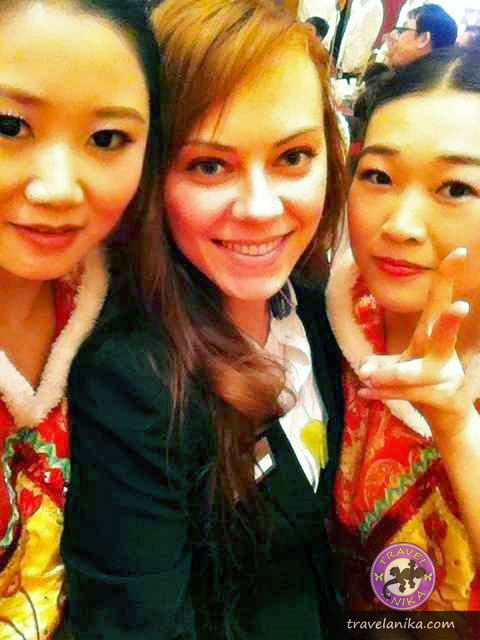 DIFFERENCES OF CULTURE ARE EXTREMELY BIG.

In my office, I had colleagues which 90% of them were Chinese. I liked girls from my team, they were nice (we even had fun from our manager) 😀  but I wouldn’t enjoy to go together for shopping, coffee or party as much as with foreigners.

Firstly, perception of the world has another dimension, secondly woman mostly don’t go out for a party and thirdly Chinese style of clothes is super crappy 😀

Perception of the world…..Well, Chinese likes get married early, around 22, the target is to get a rich man. They look for it quite openly, my European friend when he went on the first date with Chinese  she asked him directly how much he makes :D. Second European friend after the party took Chinese girl to the hotel (for sex, of course, both of them knew it), and the girl was pissed off because he didn’t choose hotel luxury enough. Well, he was white, white makes money in China, and I am sure he didn’t choose the hotel to cockroaches would get into his ass. That’s just 2 situations, only for letting you know, just 2  from many of them.

40 years old mothers can keep toys on the desk, others  love  Hello Kitty gadgets, it’s ok for many of them to cut the nails in front of the computer in the office. (Blee, I was always fucking angry hearing it while I was having a coffee and cookies.)  When they eat lunch they shout loudly ( not talking – shouting) burping and wheezing from time to time.

Would you feel pleasure spend your time with such people? I couldn’t. In the beginning that diversity was even interesting (really, I love to discover different behaves, even disgusting like this)  but when you have to live with such people is very annoying. I have never made a “TYPICAL” Chinese “BEST’ friend. Typical chinese = chinese which have never had contact with other culture.

I had Chinese friends, especially in the beginning, when I arrived. There were very nice and helpful, I would be unfair If I would say  keep away from them.  It’s not my target. I just want to express that it’s harder to get with them in “feelings” and made them your perfect best friend.

Thanks, good there are more in China. If not them I would stay in China max 2 months, not 1,5 year.

Imagine you are going to the bank you are waiting  in the line, surrounded by Chinese from each possible sides. Somewhere in this place, suddenly appear unknown, but a white face. You look at each other a few seconds like heaving in your mind like something ‘ hello my friend, how are you?Aree they pissing you off as well? We both know it, they are weird”. Something like unspoken greetings. Whites in China attract each other very much. That’s why my best friends were only from out of Mainland.

And you know? Friendships between foreigners in China are very strong. Everyone from my best friends was alone, without family, very far from home and visiting their country maybe once a year.  Skype doesn’t work properly, because when we were after work, our family was at work when our family was after work we were already sleeping. The difference between China and Europe is 7 hours in a winter time.

Everyone needs to have fun, understand each other, throw theirs fuck on Chinese culture,  heaving support and shoulder to cry. Talking with people about everything makes you feel like they would be your family and that’s wonderful. What I miss from China the most is exactly the people <3

In my case, the best of mine  was Polish and Brazilian 🙂

Brazilian. Yeah That’s cool nation, we understand each other very well, and what we love is to have crazy party 🙂

Polish. As its familiar, that polish abroad will treat second polish very bad like I used to hear from expats in Uk. Well , In China polish aren’t the same. Actually, I was happy to meet them, as we were just a few compare to others nationalities, they were always nice and friendly 🙂 Moreover with them what I was talking with everyone was feeling blessed working in China heaving salary a few times more than in Poland. Well, people with money, people happy, no need to  🙂 Ah, China hire only people with degrees so there is a selection from people – boors. I am proud of Polish in China. 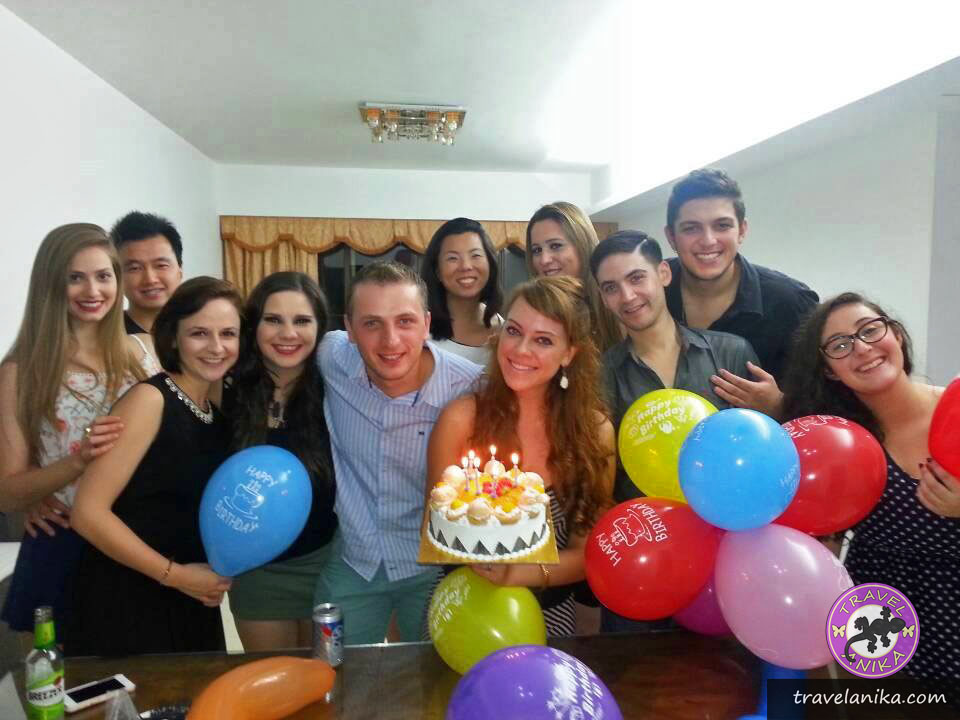 Before I went to China I was thinking that there is a difference between Polish and people from Spain, Italy, Russia or British. After all, I can say whole European are the same. You can think Spaniards are always late, Italians very loud, Russian are aggressive but you know, we have something similar, something which I don’t really know what is it but I feel it. When you start to talk you just follow and you have some opinion about X, Y or Z, we know “what we are talking about”.  That’s my feeling.

Ones where we met with friends for the small home party. There were European and Latin American. Asian usually didn’t take a part  in our meetings. We started to talk in group and after some time my friend noted:

-Look! All Americans out, only European left!

Yeah, he was right, Georgian, Spanish, Romanian and Polish. The rest went to sleep, come back home etc. Well, we were talking about investment, working conditions, religion etc.. Fuck, It wasn’t boring! Wasn’t no? 😀 It was very nice, long conversation (well, I like to hear smart things).  European! Those difference we have is only drop in the whole sea. We are just one European country!

After all, I didn’t make real friends with Chinese at all, but  I met other fantastic people,  expats. Especially one European guy, who is a reason why I left China  <3

“A journey is best measured in friends, not in miles. ”  Tim Cahill

If you are fucking tired of annoying people around you, believe me, you are lucky, it would be always Chinese! 😀

And one more time – subjectively.

If you are going to China, I would suggest you to don’t count on making ‘ typical’ real Chinese friends. You can have friends, but not real friends. I am not saying it never happened or it is impossible. It’s just very complicated for us, “white”. Choose places where you can meet foreigners, otherwise – you may be alone.

China brings people closer. Bring foreigners closer 🙂 And I love you for that!